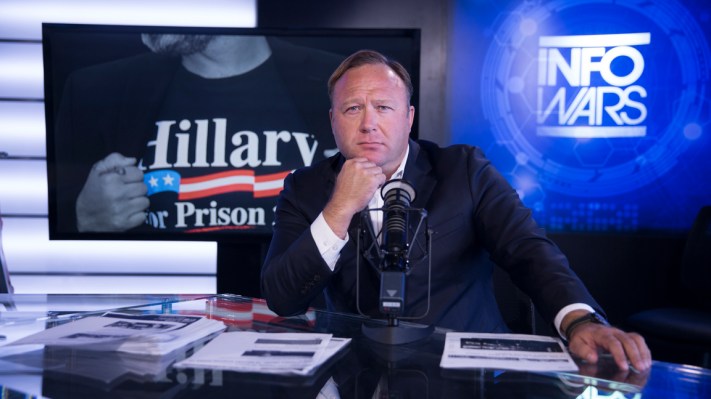 Jones has been under fire for years over conspiracy driven output, surrounding events like the Sandy Hook shooting and 9/11. In spite of what are largely regarded as fringe views, however, he’s amassed a massive viewership, and even scored an interview with Donald Trump in the lead up to the 2016 election.

Vimeo suddenly found itself at the center of the on-going Infowars debate after the show was barred from a number of competing sites. Earlier in the week, it was host to a handful of Jones-produced videos, but that number jumped suddenly when north of 50 more were uploaded to the service on Thursday and Friday.

Vimeo pulled the content over the weekend, citing a Terms of Service violation. The move, which was reported by Business Insider, has since been confirmed by TechCrunch.

“We can confirm that Vimeo removed InfoWars’ account on Sunday, August 12 following the uploading of videos on Thursday and Friday that violated our Terms of Service prohibitions on discriminatory and hateful content. Vimeo has notified the account owner and issued a refund,” a spokesperson told TechCrunch.

Infowars is moving quickly from one platform to the next, as more sites remove content over TOS violations. Twitter remains steadfast in its decision not to remove Jones, however, instead holding journalists accountable for debunking his content. Jones has also apparently found some solace in the social ghost town that is Google+.