Behold, Samsung’s latest flagship. With the Galaxy Note out of the way — for this year, at least — the company used today’s Unpacked event to breathe added legitimacy into its foldable line. The original Galaxy Fold, introduced in 2019, represent a sort of experiment for the company (along with all the hiccups that entailed), as the first foldable from a major hardware manufacture, whereas last year’s Galaxy Z Fold 2 found the company correcting some of the glaring issues with its predecessor.

Today’s event finds the company making the case for Galaxy Z Fold 3 as something beyond an experiment or a curiosity. The task will almost certainly be an uphill battle for the next few generations. Unlike the latest version of the Flip, which starts at a price reduced considerably from its predecessor, the new Fold drops the entry price $200, down to $1,800. Any price reduction is a step in the right direction — and something that should be increasingly feasible as the technology continues to scale. But even in the world of premium flagships, that will continue to be a tough pill to swallow. 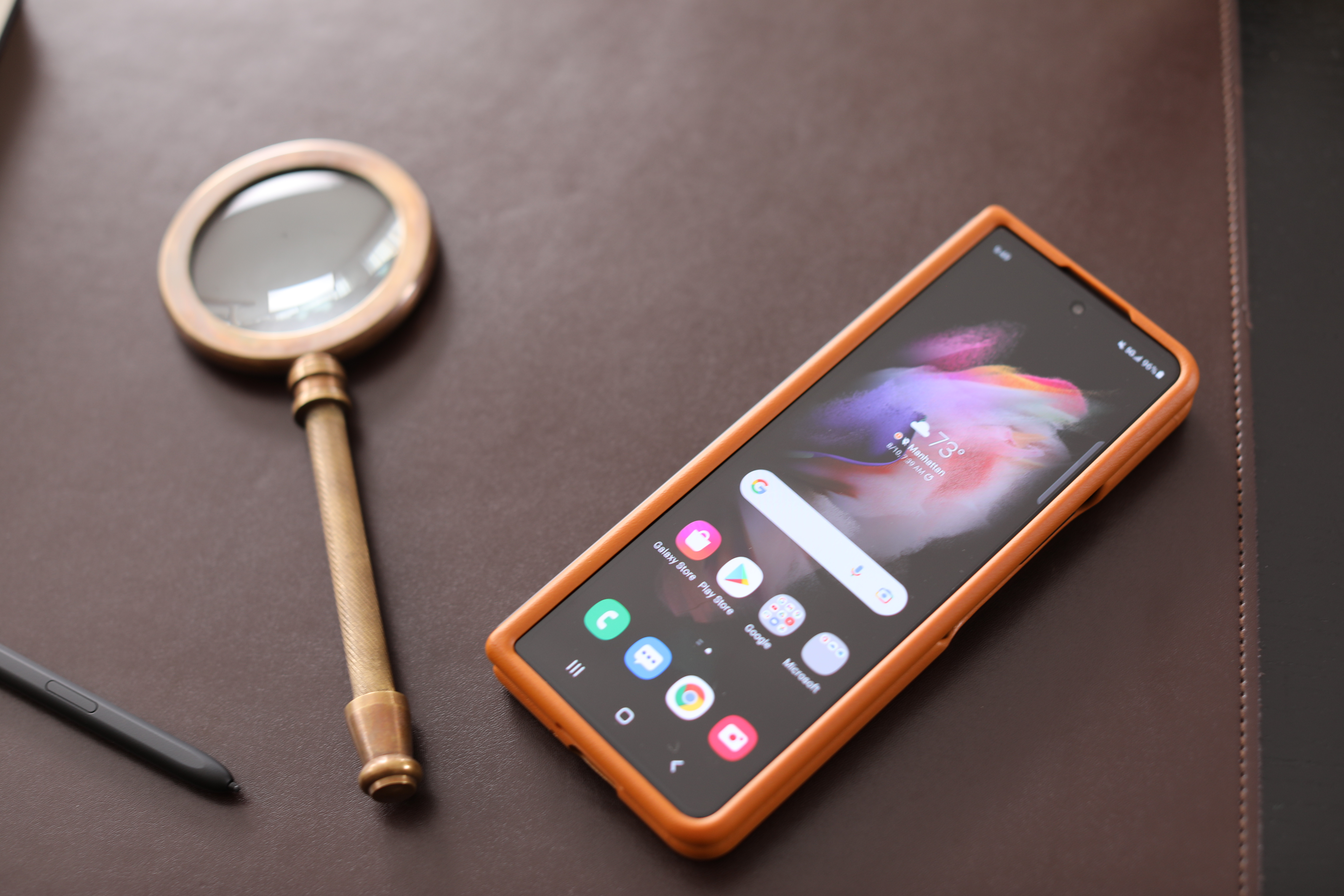 What the upgraded Fold truly brings to the table, however, is a continued refinement to build materials that make the foldable screen a feasible option for day to day usage. This, of course, is precisely what hamstrung the original. Sure, the company did a lot of testing in controlled rooms, but once the product got out into the world (and into the hands of non-Samsung employees), problems of durability began cropping up, resulting in displays that were unintentionally damaged in a variety of imaginative ways.

The Galaxy Z Fold features a stronger frame made of “Armor Aluminum,” new protective film for the foldable display, Gorilla Glass Victus on the front-facing screen and an IPX8 rating — representing the first waterproof rating for the company’s foldable. Waterproofing has, of course, become something of an industry standard, but obviously things complicate quickly when you add folding mechanisms into the equation.

In fact, that’s why the rating has an “X” stuck in the middle of it. It’s effectively protected from accidental dunks in water, but not dust and debris. This is due to the hinge mechanism created for earlier models that allows some particulate matter through, but sweeps it away with a built in brush that moves as the device opens. That effectively protects it from getting behind the screen, where it could damage the phone with a finger press on the other side. 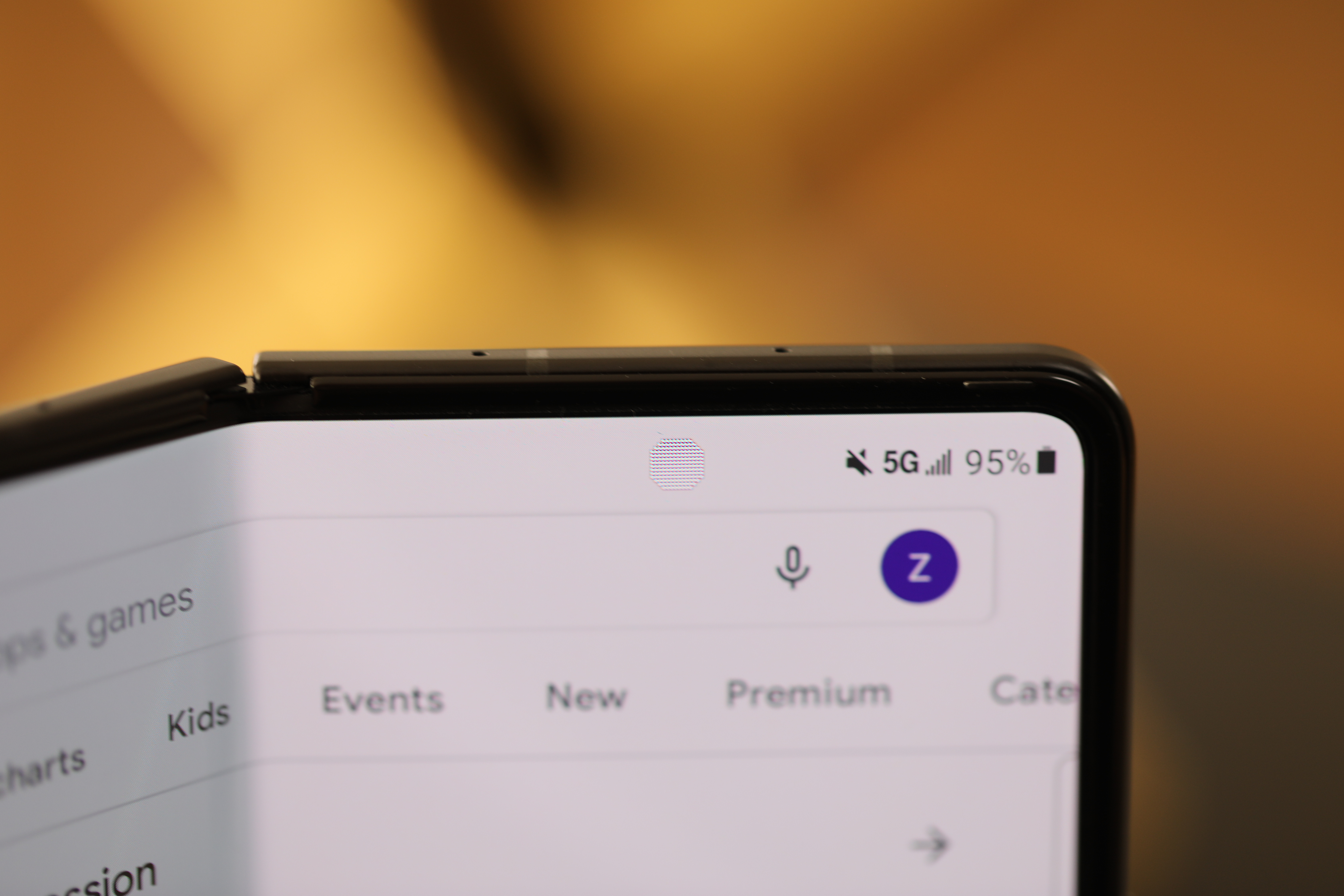 Of course, the stronger protective film is the thing. It’s what’s (hopefully) standing between you and damaging your phone’s biggest selling point with an overzealous finger press — or, for that matter, a stylus. The Fold, after all, is following in the footsteps of Samsung’s S series by blurring the line with the Note (which handily opted to sit this round out).

In fact, Samsung actually went out of its way to create a special Fold Edition of the S-Pen specially designed to not damage the Fold display. It’s optional, of course, and as with the S21, there’s slot for the stylus in the handset — that’s to be expected, given the relatively fragility of the product. There will, of course, be a case with a built-in S-Pen holster.

The Fold Edition S-Pen is smaller and features a spring-loaded tip designed to retract so you don’t damage the screen by writing/drawing too hard. Certainly the Fold is a clear candidate for stylus functionality, given its 7.6-inch canvas that puts even the Note Ultra’s 6.9-inch screen to shame. Of course, the feasibility of this combination has been severely hampered by structural integrity issues with the screen. It will be interesting to see how the company has managed to navigate that. 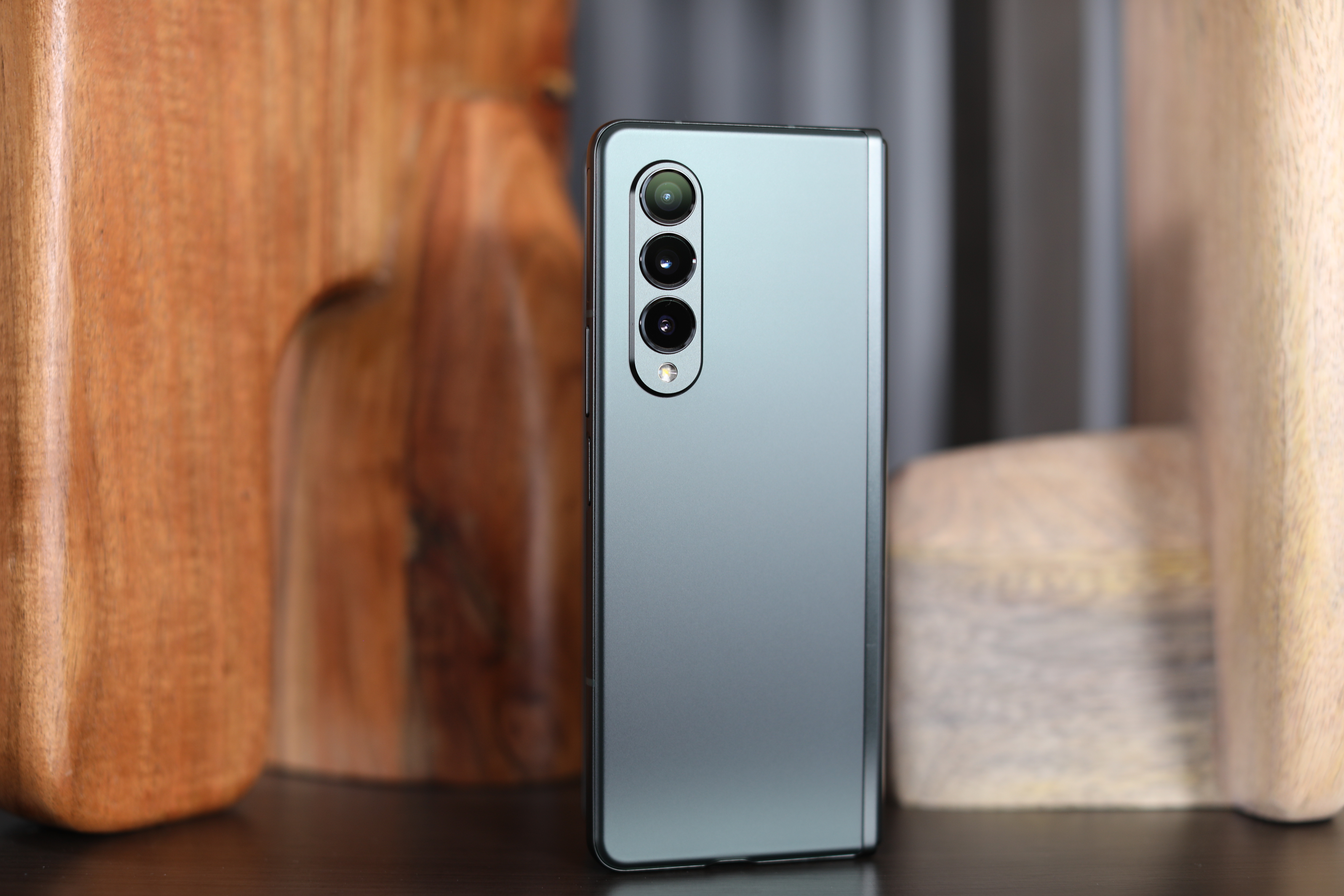 Notably, the Galaxy Z Fold 3 is the first Samsung device to add an under-display camera. That, along with foldable displays, has been one of the biggest holy grails in the smartphone category for the past several years. Samsung’s not the first to introduce the technology. A handful of Chinese manufacturers, including Xiaomi and Oppo, have either released or plan to release devices sporting the technology.

It’s telling that the company opted to test the water with the Fold. Aside from the obvious aspect of creating a contiguous display, it gives the company the opportunity to test out another mainstream technology. The dirty little secret about the first generation of under-screen cameras is that the picture quality tends to suck. Samsung surely knows this and has opted to stick it on a device that already has a selfie camera above its front display.

The company describes new tech as follows, “the minimum pixels applied on top of the camera hole, Z Fold 3 features an increased viewable area so users get an unbroken canvas for their favorite apps.” The thinking here is that the internal camera simply doesn’t get as much use, save for things like teleconferencing (which is, granted, something we’ve been doing a lot more of in the past year). As currently configured, it’s a bit of a compromise on both ends. Picture quality takes a hit and the camera hole is still semi-visible. So, either the best or worst of both worlds, depending on what you’re looking for. 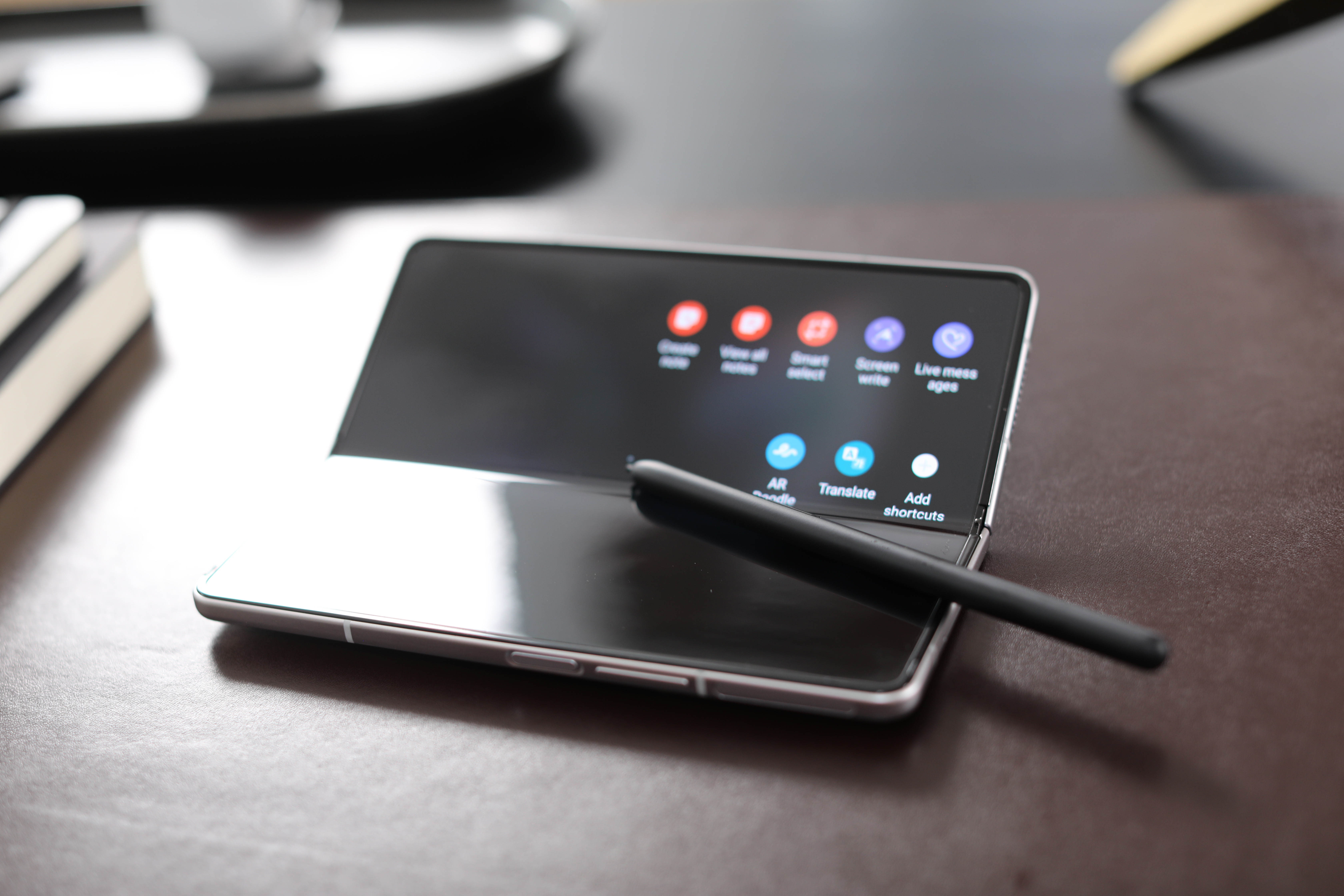 The under-display camera is four megapixels (when was the last time you saw one of those?), verses the 10-megapixel front/cover camera. The rear camera setup is virtually identical to its predecessor:

The battery has taken a bit of a hit, down from 4,500 to 4,400mAh (spread out over two modules, as is the foldable way). The Fold also supports fast charge/fast wireless and Wireless Powershare to use that 4,400mAh battery to power other gadgets. Samsung generally doesn’t offer battery estimates for phones prior to release, so wait on the review for that. The whole thing is powered by a Snapdragon 888 chip (market depending), coupled with 12GB of RAM and either 256 or 512GB of storage. 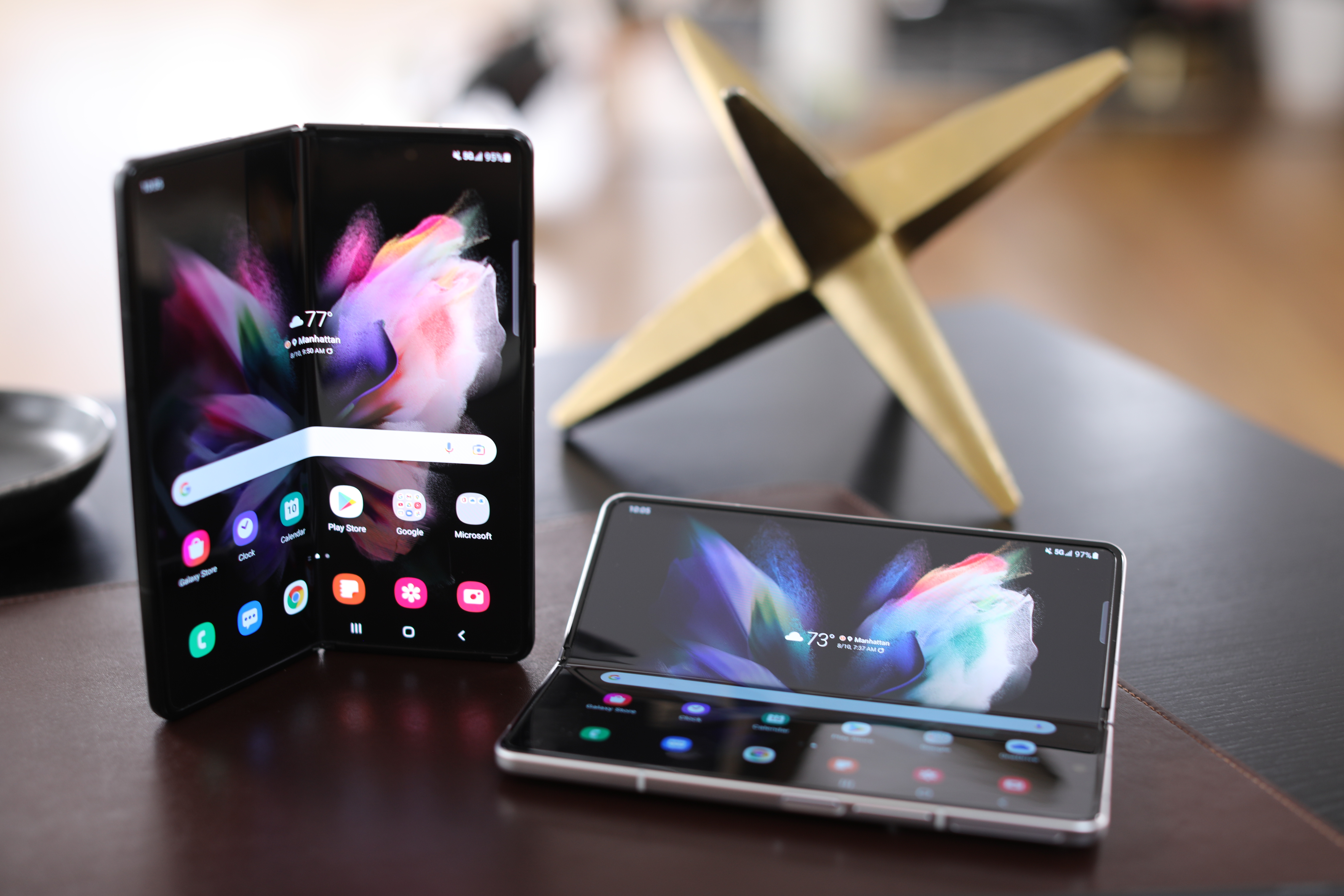 Like the rest of the devices announced today, the Galaxy Z Fold 3 is up for preorder now and starts shipping on the 26th. The $1,800 price tag continues to be a roadblock toward more mainstream adoption, though the company has moved a number of these devices to early adopters already. Preorders get a $200 Samsung Credit.